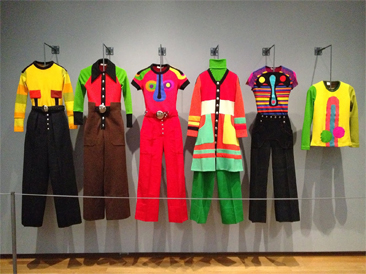 Stephen Burrows, appliquéed designs from 1969-1971 (installation photo)
From Stephen Burrows: When Fashion Danced, Museum of the City of New York

THE DANDY IN MEN’S FASHION, THE INTERNATIONAL
TEXTILE TRADE AND ONE OF AMERICA’S OLDEST “BEST BEDS”
ALL GET FINANCIAL SUPPORT

The Coby Foundation, the nation’s only foundation to focus solely on grants to the fashion and textile field, awarded $369,000 in 2012 to 13 organizations, all located in the Northeast and Mid-Atlantic.  This year’s awards are impressive for their commitment to new scholarship.

The Museum of Art at the Rhode Island School of Design (RISD) received a grant ($40,000) to plan its appraisal of the role of the dandy over the past two centuries. Artist/Rebel/Dandy: Men of Fashion, will examine the impact of figures from Beau Brummel, Regency England’s arbiter of fashion, to designer Ouigi Theodore, present-day Brooklyn’s bearded dandy. The Museum at the Fashion Institute of Technology (FIT) was awarded funds for Queer Style: From the Closet to the Catwalk, which is scheduled to open in September 2013. Queer Style will be the first exhibition and publication to explore, in depth, the significant historical contributions to fashion made by gay men and lesbians ($40,000).

The Metropolitan Museum of Art received a Coby Foundation grant for its fall 2013 exhibition, The Interwoven Globe: Worldwide Textile Trade 1500-1800. This interdepartmental effort will make startling visual connections and will highlight an important design story that has never before been told from a truly global perspective ($100,000).  The Textile Museum in Washington was awarded funds for The Sultan’s Garden: The Blossoming of Ottoman Art, a major exhibition and catalogue that examined the sudden emergence, from the royal design workshop in Istanbul, of a floral style in the mid-16th century, which was adopted and adapted by artists and designers throughout the Ottoman Empire ($40,000).

Two Maine institutions received funds for significant projects. Woodlawn Museum and Gardens in Ellsworth, Maine was awarded funding for an ambitious project to preserve, and continue to exhibit, of one of the oldest and most significant upholstered beds in the United States. The “best bed,” purchased in Boston by Col. John Black, remains in the very same room where the bed was first installed in 1827 ($35,000). The Saco Museum has organized I My Needle Ply with Skill: Maine Schoolgirl Needlework of the Federal Era, an exhibition and catalogue that examine the role of needlework samplers in the education of girls in northern New England ($18,000).

The Foundation gave awards to two contemporary one-artist exhibitions. It supported the retrospective, Bound and Unbound: Lin Tianmiao, at the Asia Society in New York, which presented the work of one of the few women to achieve fame in the Chinese contemporary art world ($40,000). Another woman artist, Orly Genger, has been invited by the Madison Square Park Conservancy to create, this coming spring, a site-specific installation using 1.4 million feet of layered, painted, and knotted rope in Madison Square Park in Manhattan ($15,000).

The Johns Hopkins University Press received Coby funding for a monograph by scholar Janneken Smucker entitled Amish Quilts: The Story of America’s First Abstract Art. The book examines how Amish quilts—once solely objects made and used in Amish homes—became first works of art worth a lot of money and second, became commodities made in home-based Amish industries and sold to tourists ($10,000). The Foundation supported another quilt project at The Katonah Museum in Westchester County, an exhibition, Beyond the Bed: The American Quilt Evolution. It traces the evolution of the North American quilt – in form, fashion, and function – from the beginning of the 19th century to the present day through bed coverings, articles of clothing, furniture accessories, wall decoration, and three-dimensional sculptures ($25,000).

Assisted by Coby funds, the Castellani Art Museum at Niagara University is collaborating with City Lore to conduct ethnographic fieldwork with makers, sellers, and wearers of ethnic wedding dress within New York State in anticipation of a major exhibition ($14,000). At the other end of the state, the Long Island Museum in Stony Brook mounted an exhibition entitled Long Island, America’s 1950s Frontier, which included a fashion gallery with trendy 1950s clothing ($10,000).  And finally, the Foundation underwrote the second in a series of exhibitions of battle flags used in the Civil War in commemoration of the War’s 150th anniversary. The exhibition, entitled 1862: Red, White and Battered, is a collaboration of NYS Parks and Military Museum staffers, and is on view in the first floor gallery of the State Capitol in Albany ($22,000).