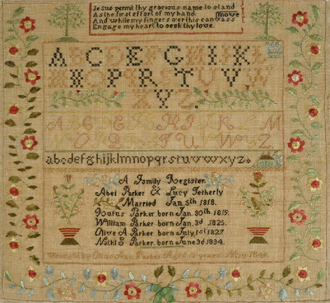 New York’s Coby Foundation, the nation’s only foundation to focus solely on grants to the fashion and textile field, awarded $355,000 in 2011 to 17 organizations, all located in the Northeast and Mid-Atlantic. Grants ranged from $3,000 to $50,000. Tapestries that emerged from the disastrous 2001 fire at the Cathedral of St. John the Divine in New York and flags that survived bloody battles of the Civil War are among the treasures that Coby funds will assist institutions in sharing with the public.

The full set of twelve tapestries depicting the life of Christ, which were commissioned by Cardinal Francesco Barberini in 1643 and hand woven in a workshop in Rome, will be exhibited together for the first time since they were donated to the Cathedral Church of St. John the Divine in New York in 1882. The exhibition will be in the Cathedral in 2013. The Coby Foundation provided the first year’s funding ($25,000) of a two-year grant.

The 150th anniversary of the Civil War is the inspiration for two projects. Civil War battle flags are the focus of a series of exhibitions in the Capitol in Albany that have been organized by the New York State Battle Flag Preservation Project, administered by the Natural Heritage Trust. The second exhibition, scheduled for summer 2012, is entitled 1862: Red, White and Battered and will feature eight historic flags out of a total of 850 belonging to the state, the largest such collection in the nation ($22,000). Civil War quilts are the subject of a major traveling exhibition being organized by the American Textile History Museum in Lowell, MA. Homefront & Battlefield: Quilts and Context in the Civil War opens in August 2012 in Lowell and then travels to museums in New York City and Vermont. The Foundation provided $50,000 in 2011 for a total of $100,000.

The Coby Foundation also supported quilt exhibitions at the Norwalk (CT) and Saratoga County (NY) Historical Societies. The Norwalk grant ($9,000) helped inspire a citywide quilt festival last summer and the Saratoga grant will examine the stories surrounding 15 quilts created from 1817 to 1984 ($3,000). A 12- by-18-foot flag that flew in the War of 1812 is the centerpiece of an inter-museum collaboration led by the New London County Historical Society that will culminate in an exhibition at the Lyman Allyn Museum in New London in July 2012 ($12,000).

In 2011, the Foundation provided funds for four fashion exhibitions and one fashion-themed book. The Wadsworth Atheneum in Hartford received a planning grant for an exhibition, scheduled for 2014, entitled Dressing Romantically: American Costume, 1810-1860 ($25,000). Strawbery Banke in Portsmouth, NH is mounting Thread: The Story of New England Fashion in spring 2012, presenting three centuries of fashion on the New England seacoast. The Coby Foundation provided continuing support to In Fashion: High Style, 1690-2011, the Shelburne Museum’s (VT) first major exhibition of historical and contemporary fashion. ($25,000); to Invitation to a Wedding: Ukrainian Wedding Textiles and Tradition, mounted by the Ukrainian Museum in New York City ($25,000); and Cocktail Culture at the Museum of Art of the Rhode Island School of Design ($35,000). It gave a subvention to Cultures of Femininity in Fashion, published by the University Press of New England ($10,000), a book that addresses women’s engagement with fashion in modernity through essays on such topics as Sapphic design, second-hand clothing, and nursing uniforms.

Contemporary art continues to be an interest of the Foundation and three exhibitions were supported. The Japan Society Gallery in New York presented Fiber Futures: Japan’s Textile Pioneers, which featured works that ranged from ethereal silk and hemp to paper pulp and synthetic fiber ($30,000). Green: The Color and the Cause was the title of an exhibition of new art presented by Washington, D.C.’s Textile Museum ($20,000). The Farnsworth Art Museum in Rockland, ME explored the art of rug hooking as practiced by artists from throughout the United States in an exhibition entitled Beyond Rugs! ($10,000).

The Coby Foundation is pleased to be supporting the opening exhibition of the DiMenna Children’s Museum at the New-York Historical Society, specifically the acquisition and display of an extremely rare sampler made in 1820 at the African Free School in New York City by 15-year-old Rosena Disery when she was a student there ($20,000). And in March 2012, Interwoven Worlds: Exploring Domestic and Nomadic Life in Turkey, an exhibition being organized by the Godwin-Ternbach Museum at Queens College, is on view at the Flushing Town Hall on Northern Boulevard in Queens ($15,000).